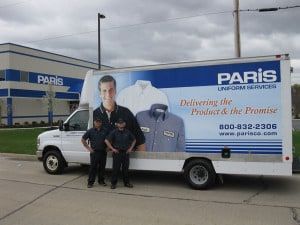 Paris Companies has been awarded a $144,850 grant to help finance both the purchase of new LPG-powered trucks and the conversion to LPG of existing gasoline trucks for its local delivery routes.  The conversion to LPG will reduce the fleet’s gasoline consumption by 116,000 gallons annually and cut greenhouse gas emissions by almost 20%.

The Pennsylvania Department of Environmental Protection announced the award in September.  In total, nearly four million dollars were awarded through the state’s Alternative Fuels Incentive Grant Program to 33 local governments, non-profit organizations and companies.  Paris Companies has received two state grants within the past six months to expand its use of alternative motor fuels.

Commenting on the recent award, Rich Hopson, Vice President and COO of Paris Uniform Services, noted that Paris has a long history of environmental leadership: “We strive to incorporate the most sustainable practices inside our plants, and alternative motor fuels are just an extension of that philosophy.  Paris is proud to be in the forefront of transportation environmental initiatives in Pennsylvania,” he said.

Why You Should Let Patients Participate in Surgical Safety Checklists

UPMC Brings a New Era of Patient Care for Altoona