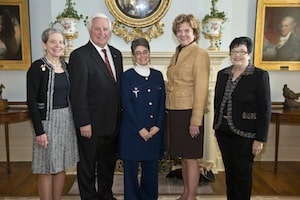 The women were honored at the Governor’s Residence in Harrisburg where they were presented with medals and citations for their achievements.

“The exceptional accomplishments of this talented group of women bring both honor and respect to Pennsylvania,” Corbett said. “I am grateful for their continued commitment to making our state a better place.”

This year’s award recipients are:

“The governor and I are pleased to recognize this group of influential women who truly exemplify the highest standards of leadership and service,” Mrs.Corbett said. “Each recipient has had a positive, lasting impact on their community and on our commonwealth.”

Distinguished Daughters of Pennsylvania was established in 1948 as a way to honor women who have shown distinguished service through a professional career and/or voluntary service. Nominated to receive the honor by non-profit organizations within Pennsylvania, the women do not need to be a native of Pennsylvania, but must have lived in the state.

Biographical information for each honoree follows:

Joan Myers Brown is recognized as a pioneer in the world of dance in
Philadelphia and internationally. She founded the Philadelphia School of
Dance Arts in 1960 and The Philadelphia Dance Company Philadanco in 1970,
where she continues to serve as Executive/Artistic Director. She is the
recipient of the prestigious Philadelphia Award, the Hazelet Award and
Philadelphia Magazine’s 10 Best Philadelphians Award, among many others.

JoAnne Epps, Shamong, N.J.
JoAnne Epps became the Dean of Temple Law in 2008 after serving on the
faculty since 1985, and as the Associate Dean for Academic Affairs from
1989-2008. She is an officer of the American Bar Association Section of
Litigation, serves on the Board of Directors of the Defender Association of
Philadelphia, and is active in several other legal and civic organizations.
She teaches criminal law, criminal procedure and evidence, at Temple’s
Philadelphia campus, as well as China and Japan. She has authored or
co-authored numerous academic publications.

Silvia Ferretti, D.O., Erie
Dr. Silvia Ferretti has been a driving force behind the growth of
osteopathic medical education in Pennsylvania. As Provost, Senior Vice
President and Dean of Academic Affairs of Lake Erie College of Osteopathic
Medicine, she has dedicated her career to the education and training of
future doctors, pharmacists and dentists. Beyond her professional work, she
has been actively involved in charitable and economic development endeavors
in Erie and throughout Pennsylvania.

Pat Halpin-Murphy, Ambler
Pat Halpin-Murphy founded the Pennsylvania Breast Cancer Coalition in 1993
and continues to serve as the organization’s president. She was appointed by
four successive governors to the Pennsylvania Cancer Advisory Board and
co-chairs the Pennsylvania Income Tax Check-Off for Breast and Cervical
Cancer Research Committee. In addition to service on multiple national
boards and commissions, she co-authored both editions of the book, “Breast
Cancer: Covered or Not? A Guide on Insurance.”

Feather O’Connor Houstoun, Philadelphia
Feather O’Connor Houstoun has served in the public and non-profit sectors of
Philadelphia and the region for more than 20 years. Most recently, she was
appointed by Corbett to the Philadelphia School Reform Commission. She
previously served as president of the William Penn Foundation as well as
Secretary of the Pennsylvania Department of Public Welfare under Governor
Tom Ridge. Author of numerous publications, she is a columnist for
Management Insights, a joint publication of Governing Magazine and the Ash
Institute of DemocraticGovernance at Harvard’s Kennedy School of Government.

Kathleen Marshall, New York City, N.Y.
Kathleen Marshall has received wide acclaim as a successful Broadway
director and choreographer. Her extraordinary creativity and talent have
been recognized by the coveted Drama Desk and Tony Awards for her musicals,
‘Nice Work if You Can Get It,’ ‘Anything Goes,’ ‘The Pajama Game,’
‘Wonderful Town’ and ‘Kiss Me Kate.’ Raised in Pittsburgh, Marshall
graduated from Smith College and began her professional career in Pittsburgh
regional theater.

Suzanne Yenchko, Lemoyne
Suzanne Yenchko is a leader in government relations, business and
communityservice. She recently retired as Director of Government Affairs for
Pennsylvania American Water, having served in the same capacity at
International Paper Company and AMP/TYCO Electronics. Considered an expert
in national and state environmental policy development and long-range
planning, Yenchko served on the boards of the Technology Council of Central
PA and the National Association of Water Companies, Pennsylvania Chapter.
She chaired the Pennsylvania Commission for Women for six years and served
on the boards of numerous local community organizations. 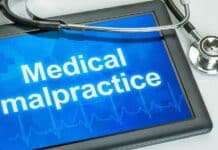 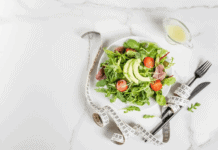 5 Ways Medical Professionals Can Engage Their Patients in Weight Loss