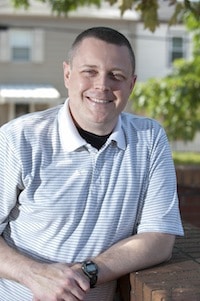 He fought for our country, enduring five activations in five years and working in the communication and signal fields within the Pennsylvania National Guard.

But for a while, Andy West was also unemployed and he wasn’t alone. More than 900,000 veterans make Pennsylvania their home, according to the U.S. Department of Veterans Affairs. About 12 percent are unemployed – a rate that’s higher than the general population’s unemployment rate of 9 percent. Veterans between the ages of 18 and 24 face an unemployment rate of 29 percent, according to the U.S. Labor Department.

UPMC took notice of the skills West acquired as an enlisted serviceman and hired him as a database administrator.  West is now a commissioned officer and has been promoted to the role of information security architect at UPMC. And now UPMC hopes to tap into the skills offered by other veterans in western Pennsylvania.

UPMC is working with 100,000 Jobs Mission, a coalition of 54 employers across the country that have set out to hire 100,000 veterans by 2020; Hero Health Hire, or H3, a team of health care industry entities that hire wounded veterans; Wounded Warrior Project, a national organization that provides programs and services to meet the needs of injured service members; and Employer Support of the Guard and Reserve, an organization of the Department of Defense which promotes a culture of employer support for National Guard and Reserve service.

UPMC also has developed resources to assist veterans in identifying relevant career opportunities at UPMC and to help recruiters best meet the unique needs and concerns of veterans.

“We seek to hire the best and the brightest in their fields and highly regard competencies such as accountability, teamwork, and leadership. All of these traits are lived day in and day out by the men and women of the United States Armed Forces,” said Gregory Peaslee, UPMC’s Senior Vice President, Chief Human Resources Officer and Administrative Services Officer.

“We recognize the sacrifices the men and women of the U.S. Armed Forces make for us. It’s our turn to do something for them in return,” Peaslee added, “This focus on veteran recruitment is an extension of our commitment to rebuilding lives in the clinical setting. We’re now restoring employment opportunities for these individuals.”

A veteran-specific portal – which can be found at upmc.avature.net/military – provides direct access to job-transition coaching, and special training has been provided to recruiters to help evaluate the unique skill sets possessed by members of the military. POWRR for Veterans, a UPMC workforce readiness program, offers workplace preparedness courses for veterans focused on how to be successful at UPMC, how to make successful transition to civilian employment, and the program guarantees that attendees will be reviewed in the recruitment process. In November, UPMC will host a citywide veteran hiring event to further encourage employment of veterans.

“One of the toughest challenges for military veterans can be finding a job at home,” said Lauren Lloyd, Director of Recruitment at UPMC. “We are aware that post-September 11 veterans are experiencing higher unemployment rates than the wider population.  Given the large number of veterans we treat as patients at UPMC and the fact that we recognize the value of all employees’ diverse backgrounds, including the unique experiences of veterans, we feel called to action by this unemployment challenge.”