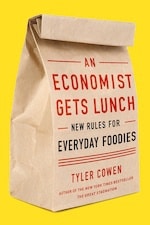 The fridge was empty the other day.

No milk, no OJ, no breakfast fixin’s.  You were out of bread, cereal, snacky stuff, and lunchmeat. There was barely a crumb for supper, either, so it was off to the grocery store for you.

Yes, the fridge was empty the other day. And now your wallet is.

You have to eat, and you’d rather eat well.  So how do you do it with economy in mind when the economy stinks? Grab “An Economist Gets Lunch” by Tyler Cowen and get some lessons.

Every now and then, says author Cowen, the world needs a “special kind of revolution” in food. It happened with Upton Sinclair, it occurred with the perfection of frozen food and the invention of the microwave. Today’s changes will “happen only gradually” but it’s possible to eat better now “for your own good and for everyone else’s.”

First of all, throw out all the fads: delete “locavore” from your vocabulary and forget about “slow food.” Eating locally is not always, economically speaking, a good idea and it’s not always the best choice, environmentally. You can, furthermore, eat fast food cheaply and nutritiously, as long as you’re willing to expand your definition of “fast food.”

What’s important to remember, he says, is that we’re eating better than ever before. Yes, obesity is a problem here but we aren’t starving. Many world-citizens can’t make that claim.

To find “better eating,” Cowen says to remember this principle: “Food is a product of economic supply and demand, so try to figure out where the supplies are fresh, the suppliers are creative, and the demanders are informed.”  This, he says, will help you make every meal count and it will help you understand that the best food doesn’t have to empty your wallet.

Remember that ambiance and presentation often have nothing to do with the taste of the food. Shop at ethnic markets and don’t be intimidated. Keep in mind that politics has a lot to do with the price of what you eat. Become educated about “cross-subsidy” food and learn to spot a trendy restaurant before it becomes trendy. And remember that much of what we produce and you eat has economic and environmental domino-effects on every other country in the world.

No doubt about it, “An Economist Gets Lunch” is a joyful book. Author Tyler Cowen is funny and flippant, and his wry observations are a delight for foodies and everyday consumers alike.

The problem comes if you’re expecting a lot about economy here, because there isn’t much. Cowen is a professor of economics at George Mason University, but his food critic side-interest consumes the majority of this book. That doesn’t make it bad in any way, but it might disappoint readers who expect something more serious and less edible.

Still, I definitely think this is a book that might change the way both kinds of readers perceive that which is on their plates. What’s in “An Economist Gets Lunch” will, in fact, give you lots to chew on.

The Bookworm is Terri Schlichenmeyer. Terri has been reading since she was 3 years old and she never goes anywhere without a book. She lives on a hill in Wisconsin with two dogs and 12,000 books. For more information, visit bookwormsez@gmail.com.

Is Work Killing You? A Doctor’s Prescription for Treating Workplace Stress...

The Bookworm Review: Happy Money: The Science of Smarter Spending by...