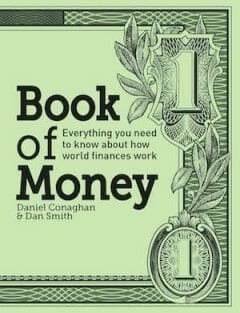 There’s not enough money in your wallet.

Actually, when you get right down to it, there never is. There’s always something else you want to buy, always another plan, idea or future desire to save for, or buy. The truth is, you just can’t get enough money.

But what do you know about those Benjamins in your bankbook?  Whatever your knowledge, learn more by reading “The Book of Money” by Daniel Conaghan & Dan Smith.

Nobody, of course, knows exactly when humans created currency, but historians believe that it happened in Mesopotamia “at least 5,000 years ago.” A king in the Middle East later minted coins, and the Greeks followed suit by making them from bronze nearly 2,500 years ago. That money had to go somewhere, so banks were eventually created – and since banks need funding, too, methods of credit were invented.

We’ve come a long way from there: we have PayPal, mobile money, a global economy, and online banking. We have more options than did our ancestors – and we have more disparity.

Today’s wealth is very unequally distributed, world-wide, and the gap is becoming a canyon: a tiny percentage of the world’s adults own the vast majority of the money pie. Land prices skyrocket on some continents and nose-dive on others. A single dollar buys a half-gallon of milk in Kenya, but only a third of a latte here.  Our debt ceiling climbs to headspinning heights, while that of Germany and the Netherlands is “relatively modest.”

So what’s a person to do?

Well, you could play the lottery or the market, but there are pitfalls to both. You can go into politics. You could invent the next new thing in banking, or you could rob one.  If you’re savvy, you might marry into money, or inherit it. You could get more money by borrowing it, but you’d have to pay it back. And if all else fails, you could do it the old-fashioned way, and save.

Getting more money is going to take familiarity with science and psychology. You’ll need to know terms and differences between kinds of banks, and have an understanding of the world’s economies – info that’s all in this book.

It does, however, buy you more fun.

So you say you know what you like: it’s green and foldable and that’s what matters. But there’s a lot more to moola, and “The Book of Money” helps you understand it all.

It would be difficult, in fact, to come up with some facet of economics that isn’t included here. Authors Daniel Conaghan and Dan Smith even touch upon subjects that don’t, initially, seem to have anything to do with money but they point out correlations in easy-to-grasp language, graphs, full-color pictures, and plenty of sidebars.

This is one of those volumes that you’ll want to keep in your office, for reference or for fun. Either way, if you’ve a passion for pesos (and more!), “The Book of Money” is a book you’ll never get enough of.

The Bookworm is Terri Schlichenmeyer. Terri has been reading since she was 3 years old and she never goes anywhere without a book. She lives on a hill in Wisconsin with two dogs and 12,000 books. For more information, visit [email protected].

Book Review: Five Days at Memorial—Life and Death in a Storm-Ravaged Hospital

The Bookworm Review: How to Read a Client from Across the Room