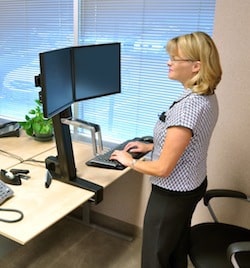 Both caregivers and employers, the healthcare industry is experiencing a dilemma many businesses face—rising healthcare costs associated with sick or absent employees. Gallup Healthways estimates six out of seven of today’s employees are obese or dealing with chronic illness. Nationally, the CDC estimates the medical costs associated with obesity is $147 billion and in Pennsylvania, approximately 36.6 percent of its residents are considered overweight or obese. One of the leading contributing factors to this epidemic? A sedentary lifestyle.

Industry data estimates at least one third of a hospital’s staff resides in the back office and that for every one full-time equivalent physician there are four to six back office employees ensuring that he or she can stay productive and efficient. Sitting for prolonged periods during their workday, these workers are at risk.

According to Dr. James A. Levine, MD, Ph.D., from the Mayo Clinic, every two hours spent sitting reduces blood flow and lowers blood sugar; and after two hours of sitting good cholesterol drops 20 percent. Long periods of sitting and physical inactivity has led to a global obesity epidemic and is being linked to: diabetes, cardiovascular disease, stroke, some cancers, even early mortality rates.  Levin and other researchers have dubbed this epidemic the “Sitting Disease.”

The good news is that for the majority of back-office employees, a sit-stand workstation, configured to fit their work environment and individual requirements, is a safe and effective way to reduce daily sedentary time.

In fact, a study by Professor David Dunstan, of the Baker IDI Heart and Diabetes Institute in Melbourne utilizing sit-stand workstations found that swapping between sitting and standing at desks each half-hour during an office working week can equal 45 minutes’ exercise. Additionally, the study found there were no changes in performance between sitting or standing while at work.

A sit-stand workstation adapts to the individual, allowing them to easily and effortlessly switch between a seated or standing position whenever their body demands, maintaining the standards of ergonomics while influencing more physical activity. This offers advantages that fixed workspaces simply cannot match.

For organizations worried that the asset investment may be high, there is supporting evidence that the Return on Investment (ROI), when calculated over the long term, does show payback, especially when comparing the productivity gains achieved through ergonomic investment.

Prompted by the results of a pilot study conducted in Fall 2011, which demonstrated that standing for a minimum of one hour during the work day had significant impact on a variety of areas of wellbeing, Ohio-based ProMedica launched a “Take a Stand” wellness program which encourages ProMedica employees to break up their sedentary work routines.

The core of the program is the installation of 400 Ergotron WorkFit Sit-Stand Workstations. Distributed to employees whose computer-intensive positions required extended sitting during the day, the sit-stand workstations enable employees, with the ergonomic adjustability, to easily raise or lower their computer monitor and keyboard to transition from a seated to a standing position whenever desired with no interruption to workflow.

Through pre- and post-survey’s, ProMedica’s 12-week pilot program examined a variety of areas including participants ability to focus at the end of the day, weight changes, pain, energy level and job satisfaction. At the end of the study, ProMedica saw improvements in every area; statistically most significant, was the level to which body discomfort decreased and mental focus increased.

The benefits to healthcare organizations are clear. Perhaps it is time the care extends beyond the patient to back office workers unaware of the risk they are facing. Giving employees the healthy choice to alternate between a seated and standing position not only breaks up sedentary work routines, producing happier, healthier staff, it also supports organizational objectives for a healthier fiscal life as well.

Steve Reinecke, Senior Director, Canada and Eastern US, Ergotron, Inc., can be reached at [email protected].

How to Make Healthcare Workplaces Safer

Get Fit in 2015: Tips to Create the Perfect Workout Space

How to Recognize and Reward A Multi-Generational Workforce