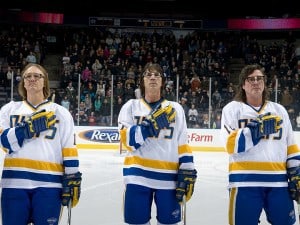 On March 19, all three of the legendary Hanson Brothers (From the movie Slapshot) will be playing in the Pittsburgh Emergency Medicine Foundation’s “Pucks and Sticks Charity Hockey Game” with the Pittsburgh Celebrity Hockey Team which also features local TV, radio, political and sports personalities.  They will face off against a team of Emergency Medical Services providers (including EMTs, paramedics, and physicians).

The EMS All-Stars will feature a number of EMTs, paramedics and emergency medicine physicians from the Allegheny, Butler and Westmoreland County areas.  This team will be coached by “Zeke” of the Y-108 FM Morning Show, while Stoney Richards of Y-108 FM, will be their goalie.

There will be two 20-minute periods with a half-time which will allow for prizes, autographs and photo opportunities for all ticket holders.  Funds raised will support the Pittsburgh Emergency Medicine Foundation, an organization that funds locally performed but nationally recognized research related to emergency medical care.