By Brian Neese on behalf of Alvernia University Online

Although Pennsylvania is the sixth most populous and ninth most densely populated state in the Union, based on information from the United States Census Bureau from 2010 and 2013, it also is home to a significant amount of rural areas. According to the Pennsylvania Rural Health Association, 48 of the 67 counties in the state are classified as rural, and all but two counties have rural areas. Approximately 27 percent of Pennsylvanians lived in rural counties in 2010, The Center for Rural Pennsylvania reports.

Although life in rural communities offers many advantages, according to the National Rural Health Association (NRHA), the rural healthcare system in America faces challenges not seen in urban areas. Population loss, poverty and access to healthcare have been problematic in recent years. Here are just a few of the initiatives that have been launched to improve the health needs and overall well-being of rural Pennsylvanians.

In general, residents of rural communities in the U.S. are less healthy than those in urban environments. According to Unite for Sight, “rural residents smoke more, exercise less, have less nutritional diets, and are more likely to be obese than suburban residents.” Already against the odds, residents in rural Pennsylvania face several specific problems that jeopardize the state of healthcare in the area.

In some places, the situation is bleak. Rotstein highlights the population loss in Taylor Township, a part of Lawrence County that experienced a 13.6 percent population loss from 2000 to 2010. “Of its 1,052 residents, more than twice as many are over age 65 as under 18,” Rotstein adds. “That ratio is practically unheard of among municipalities and doesn’t bode well for the township’s future.”

For rural areas where population is declining or (slowly) rising, healthcare faces challenges. Economic opportunity is threatened when workers and students pursue a better future. And when healthcare professionals depart, accessibility is undermined. In addition, communities with a disproportionately older population can require more healthcare resources, at the same time as access is dwindling.

According to the Rural Assistance Center (RAC), rural communities in Pennsylvania lagged behind urban areas in poverty, unemployment and income for 2013: 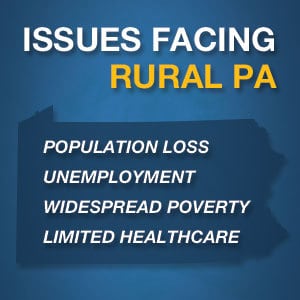 Current nurses can impact healthcare in rural Pennsylvania by advancing their education. More leaders are needed, and education fills the gap created by a shortage of nurses and the evolving healthcare system. At Alvernia University, the online RN to BSN program helps students reach their goals faster by providing courses in a flexible, convenient format. Working nurses can obtain the credentials needed to continue or advance their career, and help improve the quality of healthcare offered in rural areas across the state.

In response to some of the healthcare system challenges facing residents in rural Pennsylvania, the following solutions and initiatives have been developed.

Based on a 2014 research report from The Center for Rural Pennsylvania, telehealth can promote strong health to reduce chronic conditions and diseases, educate the public and healthcare workers, enable senior citizens to remain in their homes and much more. Using videoconferencing, online remote monitoring and diagnostic scans, electronic health records and other tools, telehealth can help providers give high-quality, affordable and accessible healthcare even in remote locations.

The study estimated that telehealth’s universal implementation would result in a 22 percent savings for the first year, increasing to 66 percent for the 20th year. Instead of a healthcare cost of $25,500 per person each year, the cost would be just $8,500; Pennsylvania would save $194 billion in the 20th year of implementation. Not only would the healthcare be less expensive, it would also be higher quality.

Currently, telehealth in rural Pennsylvania is not widely used and quality is poor. However, investing in the infrastructure and getting more healthcare providers on board can help improve the quality and access to this care, giving rural communities the chance to experience affordable, quality healthcare. And according to Richard Kimball Jr., the first step is to identify the most costly patients and how to address their needs first.

Federal programs are available to help rural areas across the country improve healthcare delivery. One example is the Rural Health Care Coordination Network Partnership Program, which supports organizations that are trying to improve the outcomes of chronic diseases, specifically chronic heart failure (CHF), chronic obstructive pulmonary disease (COPD) and Type 2 diabetes. It awards up to $200,000 per year for three years to qualified rural health networks.

These types of programs can help overcome the economic disparity that most rural communities faced, compared to urban areas. The Office of Rural Health Policy (ORHP), part of the Health Resources and Services Administration (HRSA), offers other grant programs and initiatives to help support healthcare in rural areas across the country. 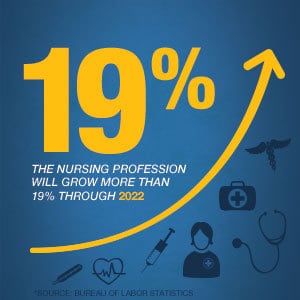 Expanding the Scope of Healthcare Workers

The need for more accessible healthcare is not just an issue in rural areas. According to the HRSA, there is a projected shortage of 20,400 primary care physicians across the U.S. for 2020, if the current system remains unchanged. To counter this trend, the HRSA projects the number of nurse practitioners and physician assistants to increase.

Nurses are expected to play an integral role in meeting the need for increased healthcare practitioners. In 2010, the Institute of Medicine announced that nurses would need to respond to the changes taking place in the healthcare system, which gives nurses more opportunities to provide quality care. It called for higher education standards, including 80 percent of all nurses to hold bachelor’s degrees. To meet these needs, nursing is growing quickly; the Bureau of Labor Statistics already expects the profession to grow by more 19 percent through 2022, making it one of the fastest growing professions in the country.

In rural Pennsylvania, a higher concentration of educated nurses could help make up for this shortage of physicians and the changes taking place in the healthcare system.

Current nurses can impact healthcare in rural Pennsylvania by advancing their education. More leaders are needed, and education fills the gap created by a shortage of nurses and the evolving healthcare system. At Alvernia University, the online RN to BSN program helps students reach their goals faster by providing courses in a flexible, convenient format. Working nurses can obtain the credentials needed to continue or advance their career, and help improve the quality of healthcare offered in rural areas across the state.