Throughout the past six years, Lori Grant focused on enhancing and maintaining the Newhaven Court at Lindwood’s Emergency Disaster Plan.

As Executive Director of the IntegraCare-operated senior living community located in Greensburg, Grant realized the importance this potentially life-saving plan could hold for the residents and team members. 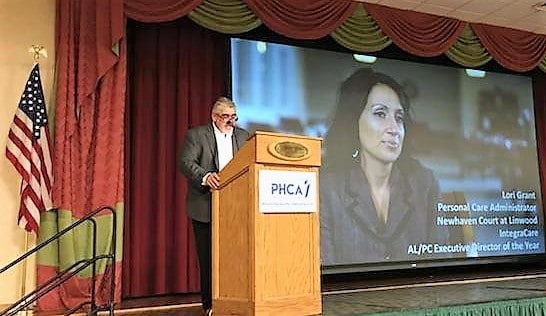 The planning and the upgrades never were more important than on the morning of Dec. 17, 2016, when a sprinkler pipe burst and flooded much of Newhaven Court at Lindwood. Grant and her team spearheaded an efficient evacuation of residents who were temporarily relocated to a nearby hotel and a rehabilitation nursing center.

Grant’s vision and determination paid off on that morning and the weeks that followed. In fact, the impact still is being felt as the Pennsylvania Healthcare Association (PHCA) honored Grant as its 2017 Assisted Living/Personal Care Executive Director of the Year.

“My first thought was the safety of the residents and the team,” said Grant, who was among seven elite health care professionals to receive a PHCA Hero Award during the PHCA’s annual convention at Seven Springs Mountain Resort on Sept. 26, 2017.

“Lori’s plan was not just a dusty binder full of promises. It was real and sprang to life right away,” said Megan Campbell, IntegraCare Vice President of Operations and the person who nominated Grant.

As the Emergency Disaster Plan unfolded, a total of 57 residents were evacuated to a nearby Hampton Inn and a local nursing center in less than four hours. Newhaven Court at Lindwood staff continued to provide high-level care to those residents in their temporary homes.

The Newhaven Court at Lindwood team needed only 10 days to move back the displaced residents. On Dec. 27, 2016, they returned to a community that had been cleaned and renovated. Damaged furniture had been replaced. The electrical, sprinkler and fire systems all were inspected and approved.

“Lori and her team responded to a difficult and potentially dangerous situation effectively and with great poise,” said Eric Walker, IntegraCare Executive Director of Sales and Marketing. “There is no doubt that Lori’s Emergency Disaster Plan and her preparedness resulted in a positive outcome for all of our residents at Newhaven Court at Lindwood.”

Grant truly appreciated receiving the Hero Award. She said her team and the residents share in the honor. As for her role, Grant said she simply was doing her job.

“To me, a leader is someone that will get their hands dirty,” Grant said. “They’ll roll up their sleeves just like their management team would or your team members would. You set the example for them.”