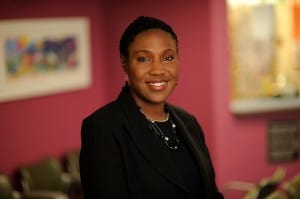 On September 3, 2012, pediatrician, Dr. Troy Lyons of Premier Medical Associates (Premier) appeared in the national television premiere of the PBS program entitled, Daniel Tiger’s Neighborhood. This new animated series from The Fred Rogers Company debuted as part of the PBS Kids line up. The episode that included Lyons aired for the first time on September 3, 2012 at 11:30 a.m. and 2:00 p.m.

The series centers around a four-year-old Daniel Tiger, son of the original “Daniel Striped Tiger” on Mister Rogers’ Neighborhood. The series features other children of the (now grown-up) characters from the Neighborhood of Make-Believe. Two, 11-minute episodes are linked by a common social-emotional theme and use musical strategies grounded in Fred Rogers’ landmark curriculum and music.

Lyons plays herself in the segment which is designed to help young children feel comfortable and to know what to expect when they visit their pediatrician. In the episode, she meets with a young patient and talks about her work as she examines him during a checkup.

According to Lesli Rotenberg, senior vice president of Children’s Media at PBS, Fred Rogers revolutionized children’s media with Mister Rogers’ Neighborhood. “Daniel Tiger’s Neighborhood continues on this path of innovation by helping the next generation of young children learn and grow in new ways,” he adds. More information on the new program is available at www.pbskids.org/daniel.

Lyons was born and raised in Pittsburgh, attended Pittsburgh City schools, and then the University of Pittsburgh. She later went to Temple University for medical school. As a general pediatrician who has been practicing for fifteen years, Lyons is very passionate about her work with children and their families. “I love having a positive impact on their health. I am also a strong advocate of breastfeeding and greatly enjoy working to help families who want to breastfeed their babies.”

She feels it was a great honor and an incredible opportunity to be chosen to play the physician on Daniel Tigers’ Neighborhood. “I was selected to be the physician who gives a young child a checkup on an episode that was designed to alleviate the fears young children have about visiting their doctor—for example, having their ears checked and other aspects that keep them well,” Lyons notes. “It was the perfect creative outlet for me to show children across the country that they can trust their doctor to care for them—at Premier, we believe that this is an important message that lasts a lifetime.”

Lyons explains that she was very drawn to this particular creative outlet because it allowed her to show so many children across the country that their pediatrician cares about them and is there to look out for their health. “In the filming with the young patient, I tried to show the balance between what a doctor needs to do in a checkup and the fears a young person may have—along with the importance of having a sense of humor and a big smile.”

She admits that balancing her care for hundreds of children, along with two of her own, does not leave a lot of time for creative pursuits. However, when the opportunity came along to represent Premier and play the role of a child’s doctor on a national television program, she felt she had to take it. “It was a chance to make an impact on a lot of young people in a very direct way, and it was a true honor for me to be involved with a Mister Rogers’ program and with WQED.”

Although she was honored to have this performance opportunity, Lyons believes an alternate creative path still closely related to healthcare would have been followed if she were not a pediatrician. She explains, “I can’t imagine myself as a full-time actor, as I am very much dedicated to the care of young people. But if I was not a pediatrician with Premier, I would probably pursue another creative outlet that I am passionate about—which is assisting the deaf community’s access to healthcare.” Toward this interest, she is currently learning sign language and plans to become certified in the future.

Beyond her professional work with children, the majority of Lyons’ time is spent being active with her own, who are ages 4 and 11. She also is dedicated to maintaining strong ties with the local community. For instance, she is an active member of her church as well as a member of a public service organization called Delta Sigma Theta. “In addition, I feel honored to be a great example for inter-city youth—an opportunity to show that with hard work and determination you can reach your goals—even if you weren’t born with a silver spoon in your mouth,” she adds.

With a focus on building better care, Premier is the largest multi-specialty practice in the Greater Pittsburgh area. In a healthcare environment of constant change, the physicians at Premier are committed to preventative care and creating value for every dollar a patient spends on healthcare. Lyons is part of Premier’s team of pediatricians and physicians who are working to provide the highest quality service at the lowest cost—with a focus on bending the cost curve that is crippling the healthcare industry. “I work for a great company that cares for more than 100,000 people in this region—I simply love what I do and I am grateful that I had the support of the team at Premier to take on this creative opportunity,” she concludes.

Formed in 1993, Premier’s ultimate goal is to build a close, long-term relationship between patient and physician that will reduce unnecessary hospital admissions and lead to healthier lives. Premier has a diverse team of over seventy physicians in ten convenient locations and offers specialties that include: asthma/allergy/immunology, behavioral health, cardiology, family medicine, gastroenterology, general and breast surgery, internal medicine, neurology, pediatrics, podiatry, radiology, and sleep medicine. For more information about Premier’s philosophy of healthcare, team of physicians, and locations, please visit www.premiermedicalassociates.com or call 412-457-0060.

Joshua C. Bartolovich is a Movie Extra who also Goes the...