It was a warm day at the end of July. Ned and Joanne’s grandkids had made the trip half way across the country for a special visit. There was a buzz in the neighborhood. And although she hid it pretty well from her husband, the anticipation on Joanne’s face was apparent.

Little did Ned realize what was about to happen.

Ned is a proud veteran of the U.S. Merchant Marines, having served overseas during World War II. Now being seen by Family Hospice and Palliative Care for a heart ailment, Ned is quick to share stories of his days in the service.  His genuine smile and direct but friendly approach add to his appeal as one of America’s many heroes.

One of our Family Hospice Social Workers, Mary, sees Ned on a regular basis. Mary has enjoyed getting to know Ned, Joanne and their family.

Mary made it a point to get to know Ned below the surface. In talking with him about his life experiences, Mary noticed that Ned expressed much pride and joy in his Merchant Marine service. “It was a recurring theme in our conversations,” noted Mary. “And was easy to tell how much that part of his life meant to him.”

Ned was a teenager when he joined the service and as part of a Merchant Marine ship during World War II, found himself in a lot of dangerous situations. He told Mary that his experience influenced his decision to go to college – as he came to realize he could do whatever he set his mind to.

Mary took note of all this and gave thought to what was meaningful to Ned – and his loved ones. She decided to go above and beyond.

There was a knock on Joanne and Ned’s door on that warm July day. In walked U.S. Rep. Tim Murphy, holding an American flag that had flown over the Capitol, in Washington. It was a surprise visit, arranged by Mary with Joanne acting as her “co-conspirator”. In bestowing the stars and stripes, Rep. Murphy thanked Ned for his service. A huge smile stretched across Ned’s face – mirroring that of his family and friends gathered around the room. The veteran and the congressman exchanged some stories, with Ned recounting his days in the Merchant Maries. He even told Rep. Murphy the story about the time he tossed some materials overboard, thinking they were no longer needed — only to find out that was a big mistake. Ned can laugh about it now, of course.

What Mary did for Ned is an excellent example of the hospice philosophy of care. While providing comfort for the patient is the goal – hospice staff also help the patient live every day to the fullest. That means getting to know the patient and his or her interests, hobbies and background. What is important to the patient becomes important to the hospice interdisciplinary team. And in turn hospice cares for family and loved ones through support and education.

At Family Hospice, we are proud to provide a range of programs and services that meet the needs for compassionate care, support and education. Whether it be our Operation Respect program for Veterans, or Caregiver Training for loved ones of home hospice patients, we spend each day getting below the surface so all needs are met.

Ned’s case is a perfect example. Mary identified something that would mean the world to Ned – and afford him the honor deserved of a U.S. veteran. By making a few phone calls and devoting some of her time to establishing a dialogue with Rep. Murphy’s office, Mary gave Ned, his family and friends a cherished memory.

After Congressman Murphy said his goodbyes and departed, Joanne explained how hard it was to keep the surprise visit a secret. Looking across the room at the smile on Ned’s face, she continued, “But it was so worth it.” 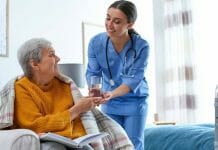 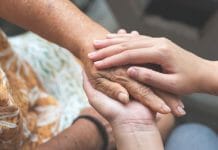 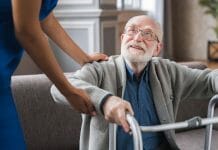