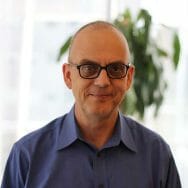 A medical office building with a striking design can go a long way towards helping a healthcare services provider looking to expand their market, by becoming a recognizable landmark.  For anxious parents bringing children for treatment, a strong design statement can help to reinforce the mission of the healthcare provider.

At the South Fayette, Pennsylvania, medical office building for Children’s Hospital of Pittsburgh of the University of Pittsburgh Medical Center (UPMC), the architects at IKM created a design solution that provides striking and memorable imagery consistent with the client’s goals for the project.

Communicating the Brand with the Design

Anna Klingmann, an architect and academic who specializes in branding, states, “A brand is something that brings out the identity of a particular place.”  IKM’s concept dealt with two overarching ideas.  First was to capitalize on a site selected for its high visibility from an interstate highway that could present the Children’s Hospital brand firmly in the area south of Pittsburgh.  Second was to create a building with a memorable similarity to the main hospital to emphasize the brand.  As Children’s first stand-alone outpatient facility in well over a dozen years, the building design needed to communicate their successful brand.  The client wanted a similar aesthetic to their main hospital but not a replica.

The simple organization of the building is reflected in its massing.  Waiting areas and public circulation are placed at the front of the building.  Behind them, exam rooms and treatment spaces are contained in a large 4-story volume with brick veneer.  The upper floor public functions are contained in a metal panel-clad three story “tube” element that rests on a tile-clad one-story podium.  The end of the “tube” becomes a glazed lantern visible from the highway.  The “tube” is canted at an angle from the rectilinear brick volume.  Additionally, a glazed portion of the waiting space on each floor juts out from the “tube.”

As the major design element, the “tube” was used to convey the branding message and concept.  At the main hospital, one of the most memorable features of the building are those portions that are clad in variegated copper panels.  The juxtaposition of the expanses of copper against brick masonry and curtainwall give the main building a very strong visual that contributes to the institution’s brand identification.  Due to cost concerns that ruled out actual copper cladding, IKM decided on an integrally-insulated metal wall panel system as the basis of design.  Project designer and manager, IKM’s Douglas Lieb, AIA, carefully selected a palette of 3 colors for the panels with the tonal values of copper.  Approaching the building, you notice the interplay of panel sizes and colors, the depth that the reveals lend, and the five different sizes of windows within the system, seemingly in random locations yet each placed in a very studied position.

Construction as a Reflection of the Design Process

The client retained a construction management entity to advise on cost and constructability during design.  The benefit was an ongoing dialog about design and construction choices relative to the quality level of the building.  As a net result of this process, the project ultimately came in more than 16% under budget.  This savings afforded the client the opportunity to purchase all new equipment (which they had not originally intended) as well as major items of equipment that they had also not intended.  The greatest benefit of the savings was that it enabled the client to build out the MRI suite on the 4th floor two years ahead of schedule, thereby expanding patient care as well as bringing a significant revenue stream online.

Rycon Construction Inc., general contractor for the project, proved to be a valuable partner in the execution of the building.  Rycon project manager Brandon McKee brought an appreciation for working with the design team and the client to the project.  Rycon understood the need to look ahead and “around corners” to anticipate coordination issues before they arose.  For a healthcare client with multiple user-group stakeholders in the project, the actual built product is often a moving target.  Rycon was able to adjust to revisions and user-group final decisions without no delays in the project schedule.

As an outpatient facility the Owner would typically not have a cadre of on-site facility staff.  It was important that building systems such as HVAC and lighting be “smart” systems that report back to the Owner at the main facility.  Controls for these systems were carefully selected and vetted with Rycon facilitating this process.  They did not want to overpay for underperforming controls.  Aramark served as commissioning agent on the project for building systems as well as the building envelope.

Total change orders for this project were about 3% of the total construction cost.  Over 95% of the post bidding changes resulted from owner initiated requests used to adjust the construction to new program requirements that user groups brought forward after design was complete.

IKM set a bold direction for the design of the building, but it was the strong level of teamwork among the client, the general contractor and the design team that enabled the design vision and the price point to be delivered in a way that more than met the client’s expectations.  Children’s Hospital of Pittsburgh is pleased with product it received and South Fayette now has a strongly identifiable work of architecture that the public can readily connect with the services offered there.

Bob Bailey is Specifications and Constructability Specialist for IKM Incorporated. Bob has been a full-time specifier for 25+ years with experience in higher education, healthcare, corporate, parking structures, K-12 education, laboratories, student housing, recreation centers, and historic restoration/ adaptive reuse. His project experience includes a number of LEED-certified projects including several LEED Gold projects.  He is the founder of Pittsburgh Specifiers’ Roundtable, a past president of CSI Pittsburgh, and a winner of CSI Pittsburgh’s Roswell S. Johnson Memorial Award for specifications writing.  His responsibilities at IKM extend to improving the firm’s continuing education effort and intern development program.

The Road To Success Is Always Under Construction (Part II)