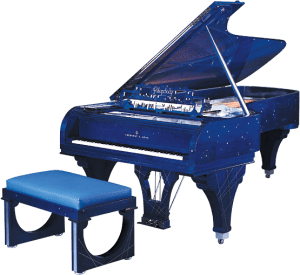 Elvis Presley may have had his blue suede shoes, but Dr. Greg Roscoe has his blue Steinway piano.

Dr. Roscoe, an ENT surgeon from DuBois, first saw a photo of the blue piano while he was reading a magazine about 12 years ago. When he spotted “Rhapsody,” a beautiful, midnight blue Steinway piano with over 400 mother-of-pearl stars, Dr. Roscoe knew not only that he wanted one, but that he had to have one.

And so began his quest for the piano that resulted in not only one of the very few Rhapsody instruments for his very own, but a Steinway dealership.

The Rhapsody piano was created by Steinway to honor the 100th anniversary of the birth of George Gershwin. Named after Gershwin’s first classical symphonic work, “Rhapsody in Blue,” the piano is crafted from maple veneer that has been dyed midnight blue. The stars were hand cut into the piano and inlaid in a random fashion.  To pay honor to Gershwin’s hometown, the music desk has a hand-carved silhouette of the New York skyline.

After seeing the photo, Dr. Roscoe traveled to Pittsburgh where the closest Steinway dealership was located.  The dealer helped Dr. Roscoe locate the rare piano, but Dr. Roscoe and his wife, Linda, also visited New York City, home of the Steinway Company where they toured the production facility and learned more about the iconic company.

“The factory was immaculate, like the Rolls Royce factory at Goodwood and the Bentley factory in Crewe,” Dr. Roscoe said.

He continued, “To see the rim bending still done by hand was a true testament to the passion Steinway has for each piano that they make.”

According to Dr. Roscoe, it takes six men to bend a rim, place it on the press and lock it in place for 24 hours for each and every instrument.

The more Dr. Roscoe learned about the Steinway Company, the more he loved. Soon, not only was he in love with the Rhapsody, he was in love with the company. After his successful year-long search to obtain the Rhapsody was completed, Dr. Roscoe and his wife continued learning more about the company and stayed in touch with Steinway representatives.

In 2012, the Steinway dealer in Pittsburgh was slated for retirement and the company asked if the Roscoes would be interested in serving in that role.

“We were delighted to be asked – to join this historic company in providing the world with the opportunity to own a Steinway was an honor we never thought we would have,” Dr. Roscoe said.

It might seem odd for an ENT surgeon who doesn’t even play the piano to end up as a Steinway dealer, but in an odd way, it makes perfect sense. Dr. Roscoe is an accomplished musician, playing the saxophone, clarinet and drums. And he appreciates the strong values and background of the company.

“Music helps us emote the feelings of life. It helps us celebrate in times of joy, it comforts us in times of sadness and struggle, it helps us work through anger, and it gives us hope,” he said.

The current Steinway showroom in Pittsburgh is located at 445 S. Main Street on the west end of Pittsburgh. To further showcase and introduce Steinway pianos to the Pittsburgh area, a new location will open in the Ross Park Mall in May.

“When you own a Steinway, you don’t own a piano. You own the freedom of limitless musical expression,” said Dr. Roscoe.