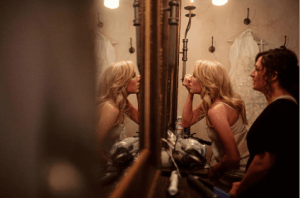 But for everyone there, it was one of the most beautiful weddings they had ever attended.

“There wasn’t a dry eye in the room,” said Penny Haas, Hospice R.N with Celtic Healthcare.

Haas and other Celtic healthcare team members helped Mark Adams and Amy Matthews* get married when Mark was in the final stage of his life. While he had recently transitioned into hospice with Celtic, it wasn’t an easy path for him or his beloved partner of 15 years, Amy.

According to Matthew Bupp, Hospice Chaplain, Mark was in his early 60s and suffering from a heart condition that would be fatal without a heart transplant.

“He was holding out hope that he would receive a heart and Mark and Amy just clung to any good news,” Bupp said.

When Mark learned from his doctor that he had reached a stage where he was to ill for transplant consideration, it was hard news for the couple.

“He didn’t want to leave her and was very worried about her. He wasn’t at peace with dying,” said Bupp.

Bupp started ministering to the couple before Mark’s transition to hospice because they were in such great turmoil.

“I sat with both of them and Mark’s heart started to open up. Even though his physical heart was dying, his spiritual heart was growing,” Bupp said.

When Mark finally made the difficult decision to move into hospice care and turn off his defibrillator, he and Amy decided they wanted to get married.

“It is part of our job to make sure our patients have their affairs in order. Mark wanted to do is make sure that Amy was taken care of after he was gone,’ said Haas. And that meant marrying her.

Erica Sickafuse, Mr. Adams’ home health nurse said, “He wanted to do right in the eyes of God and marry her.”

When the subject came up, Haas said Amy was “delighted.”

“She had thought the time had run out for that dream of hers,” she said.

Haas, Sickafuse and Bupp were all at the couple’s home when the difibulator was turned off. When they expressed a desire to get married, everyone jumped into action. Haas and Sickafuse went outside and quickly gathered flowers from the yard and nearby woods. Bupp prepared a ceremony.

In a matter of minutes, the ceremony was started.

“They were both still in their pajamas, but it was beautiful,” said Haas.

Mark’s health was so tenuous, that at one point during the service, Haas and Sickafuse thought he might have passed.

“Amy was saying, ‘Not yet, not yet,’ and it really seemed like he was gone, but then he came too again,” said Haas.

Sickafuse said, “Even though he was so ill, he was so mentally sharp. It was really amazing.”

After the service, Bupp worked with county officials to get the marriage license processed as quickly as possible.

“They even had someone drive the marriage license out to me to get everything signed,” he said.

Sickafuse took the photos on her cell phone.

“It was an old flip phone, but we didn’t have any other camera and we needed photos,” she laughed.

Within 24 hours of being removed from his difibulator and getting married, Mark was gone.

“He was so happy that night. He couldn’t stop smiling and he kept calling her ‘Mrs. Adams,” said Bupp.

While gathering bridal flowers, snapping wedding photos on a phone and serving as witnesses for a wedding may not be in their job descriptions, it is something Haas and Sickafuse didn’t think twice about.

“It is important to realize providing hospice care extends beyond medical care to the spiritual, mental and emotional healthcare of patients as well,” said Haas.

“We are a team; it isn’t just those of us in the field, but people behind the scenes as well. We do what we need to do to take care of our patients,” she said, “We even took another patient fishing. His last wish was to fish, and through a network of community and Celtic team members, we were able to fulfill his wish to fish one final time.”

And all three members of the healthcare team remember the wedding with great fondness.

Sickafuse said, “It was so very sad, but so very beautiful at the same time. He had a beautiful death.”

Bupp said, “I had never seen him so happy and at peace.”

And that was just one day in the life of a Celtic hospice team – a true dream team – fulfilling wishes during their patients’ final journeys at end of life.