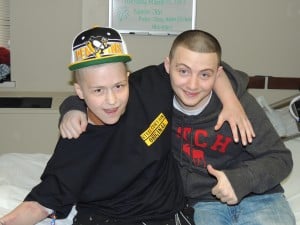 Rick Rector was born with a congenital heart defect known as dextrocardia, meaning his heart was backwards in his body, essentially, and had only a single valve.   He and his family had lived for most of his 22 years knowing that at some point a heart transplant would be necessary to save Rick’s life.

Due to the defect, Rick’s skin tone had always had a blue cast to it, and he was known as “blue boy” in the Spring Hill community he still calls home.  Early on, Rick learned to “own the look” rather than succumb to teasing at the hands of others.  “God made all kinds of people, some pink, some white, some brown.  I’m a blue person,” said Rick, with the wisdom of someone who takes nothing for granted, asks thoughtful questions and remembers every kindness.

Nonetheless, Family Hospice RN Clinical Supervisor Steve Jackson was elated when he saw Rick following his February 13 heart transplant “as pink as a new born.”  He knew that pink was a very good sign.

Steve had been following Rick at home since last fall under Family Hospice’s palliative home care program for the management of medications necessary to keep Rick’s heart pumping.  Palliative home care supports individuals with a serious illness who are continuing life-prolonging treatment.

Explains Steve, “A person who elects hospice opts to forego further aggressive care and focuses solely on quality of life; the palliative home care patient may have or desire other treatment options but can still benefit from Family Hospice’s expertise in achieving and maintaining comfort and emotional support.”  Currently, 10% of Family Hospice patients receive palliative home care.

Steve’s visits served as a bridge between the hospital and home while Rick was evaluated, approved and wait-listed for a heart transplant, and they became the foundation of a bond that both Rick and Steve cherish.  “Steve’s like a brother to Ricky,” says Rick’s father, known as Big Rick.  “I called him in the middle of the night when there was a heart for Ricky, and he came to see us in the hospital that day.”  Steve agrees, “He’s the little brother I never had.”  He now visits Rick as a member of the extended Rector family.

The word “loyalty” is written across Rick’s forearm.  It’s an attribute he practices and appreciates in all his relationships.  A month out from surgery, Rick confesses that he has to learn confidence in his new heart, but he’s walking three to four times a day and wants Steve to resume his nursing visits once he is able to return home, a loyalty Family Hospice looks forward to reciprocating. 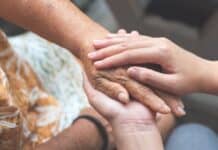 On the Wings of Doves