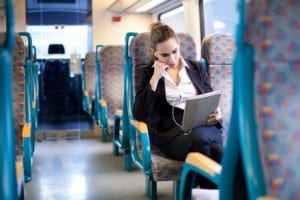 If you’re lucky enough to have a reliable source of public transportation in your area, take advantage of the idle time and fill it with a few exercises that boost your brain power. You’ll feel more energized and efficient, and ready for your day ahead or time home with family at night. Here are just a few ways to utilize that downtime during transit and transform it into time to train your brain.

Many people want to learn a second language simply because it expands their ability to communicate and make travel easier and more fulfilling. In addition to those benefits, learning a second language is also advantageous for your career. Not only can people who speak multiple languages expect greater career opportunities and higher pay rates, the need for interpreters and translators is on the rise.

DuoLingo offers free language-learning apps for Spanish, French, German, Italian, Portuguese and English that have been found to surpass university courses in an independent study.

While memory-loss may be most associated with older adults, the average person’s memory actually starts its decline at the age of 20. Younger adults simply don’t notice, according to ABC News, because they have more memory to spare.

The good news is that memory training is easy, and can even be fun! A study by researchers at the University of California, San Francisco discovered that when older adults learned to play a new video game well, their brain waves behaved more like those of young adults.

So, no more feeling bad about gaming on the long bus ride. In fact, go ahead and download your favorite games at iWin.com, and give your brain some juice in a fun, relaxing way.

Completing your degree or earning an advanced degree, is a great way to open up your job prospects. However, if you don’t want to bear the pressure or expense of going back to college, you can continue to study new subjects of interest. The free classes offered by Coursera are designed by instructors at some of the world’s top universities, so students gain access to the same education without the cost.

Getting to and from work is the biggest time-waster in the lives of many American employees, in fact the average commuter spends 38 hours per year stuck in traffic, according to The Atlantic—That’s equivalent to an extra week of work each year without pay! Utilize the public transportation options available in your city, and use your time in transit in productive, fun ways that benefit your memory, increase your focus, challenge your mind, and open the possibility of new languages and hobbies.