It is estimated that about 5.8 million Americans are living with dementia at the moment.

Dementia is the term used to describe various conditions that affect cognitive functioning, such as Alzheimer’s disease. As such the signs and symptoms of dementia revolve around the inability to think, remember, and reason.

Even though dementia typically occurs in the elderly, it is not a normal characteristic of aging. Brain deterioration will occur to everyone as they age but it occurs more rapidly in people with dementia.

According to Jane Byrne, Project Coordinator at FirstCare nursing home Kildare, “Dementia slows down one’s memory, thinking, and reasoning capabilities. This happens because the parts of the brain used for these functions are either diseased or damaged.”

Nonetheless, if you or a loved one starts experiencing memory problems, do not be quick to conclude that it is dementia.

To receive a dementia diagnosis, one has to have several types of impairment that significantly interfere with their everyday life.

Thus, in addition to memory problems, the person should also be experiencing impairments in language, communication, focus, and reasoning.

Each case may vary, but there are a handful of very typical early signs of dementia. Learn all about them in this detailed article.

Early Signs and Symptoms of Dementia

If you suspect that your loved one may be suffering from dementia, it is important that you get a professional opinion so you can start managing the symptoms early.

This allows the progression of the disease to be slowed down, thus making the job of dementia caregivers easier.

The following are the early signs and symptoms of dementia to look out for:

Memory loss that affects daily life is usually the biggest telltale sign that one might be suffering from dementia.

It is usually characterized by repeated requests for the same information, increased reliance on written notes, and more difficulty in recalling recent information or events.

What it’s not, however, is occasionally forgetting things such as where you placed your car keys. It should be an ongoing trend of forgetfulness.

If an individual starts displaying apathy (lack of interest), or withdrawal from people and activities that they typically used to enjoy, it could be a sign of early dementia.

For example, if they are no longer interested in how their favorite sports team is fairing, do not seem to care about their hobbies, or start skipping get-togethers with their loved ones, there is a likelihood that they could be on the onset of dementia.

Disorientation can be described as the feeling that one gets after waking up from a deep sleep and cannot seem to figure out where they are or what day it is.

Nonetheless, disorientation is quite serious for people with dementia.

If your loved one cannot seem to figure out what season or year it is, their location, or why they are there, it could be indicative of dementia.

As the disease progresses, it is not uncommon for the individual to believe that they are many years younger than they are due to an unawareness of time passing.

This refers to having problems with depth perception, distances, recognition of familiar faces and objects, or interpreting the images that they are looking at.

As such, an individual with dementia might start having difficulties with things such as finding their way home, navigating stairs, reading a book, or climbing a bathtub.

However, make sure that it is not an age-related condition such as cataracts that is causing those difficulties.

A person with dementia will typically have difficulty finding the right words to describe everyday things. For example, they might say, “the thing you cook on,” because they were unable to find “stove.”

Additionally, if they used to express themselves articulately on paper and can no longer do so, you should take it as a warning sign.

6. Difficulty in Planning and Problem-Solving

As such, if the person starts becoming slower at things such as balancing their checkbook, paying their bills, or cooking, it is a sign that their executive functioning is impaired.

Has your normally easy-going dad become fearful or irritable lately? Are they accusing people of random things thinking they are trying to take advantage of him?

Or, did he have an over-the-top reaction when they were at the store and found that products have been moved to a different aisle?

If an elderly individual suddenly starts deviating from their typical mood and behavior without a trigger, you should take it as indication that their brain might be experiencing changes.

When someone starts experiencing dementia, not only will they replace things, but will also have a difficult time retracing their steps to find the item.

Often, you will find the misplaced item in odd places such as eyeglasses in the freezer.

The individual may become frustrated and say that someone else took their things, as they do not remember doing it.

If your loved one has been displaying a pattern of poor judgment consistently for the past few weeks or months, you should consider scheduling an appointment with a doctor.

Poor judgment can be demonstrated by things such as constantly falling for phone scams, decrease in personal hygiene, or dressing inappropriately for the weather.

This is one of the most telling signs that someone might have dementia.

It is characterized by a difficulty to follow storylines since the individual keeps repeating the same questions in a conversation, even after being answered severally.

They may also start repeating daily tasks, such as shaving.

Unfortunately, there is no cure for dementia. However, since it is a progressive disease, the best you can do is to get treatments that slow down the progression of dementia symptoms.

This is why it is important that you recognize the signs and symptoms of dementia at their onset.

Are you concerned that an elderly loved one could be having dementia? Schedule a consultation with a physician so they can get evaluated for the condition.

Also, be sure to check for home tweaks that will make your house more senior-friendly to allow you to give better care to your loved one. 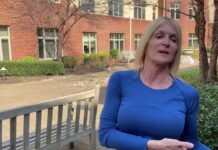